Even religious men and women wonder, "What does the Bible say about divorce?" when experiencing extreme difficulty within their marriages. Christian couples often look to the Bible for guidance on how God wants you to deal with thoughts of divorce or what to do when one partner files for divorce. Learn what the Bible says about divorce so you can make a divorce decision you'll feel good about.

Bible Verses About Divorce From the Old Testament

The Bible contains several passages about divorce with most indicating that God did not intend for divorce to be an option. Despite this notion, divorce statistics indicate that people of different faiths have similar divorce rates to non-religious people. These Bible verses presented from the King James Bible, or King James Version (KJV) represent what the Old Testament generally says about divorce.

What the Bible Says About Marriage

Starting in Genesis 2:24, the Bible shares what marriage is meant to be saying, "Therefore shall a man leave his father and his mother, and shall cleave unto his wife: and they shall be one flesh." This assertion that a husband and wife shall be an unbreakable family is further expressed in Matthew 19:6 with the verse "What therefore God hath joined together, let not man put asunder."

The first Bible verse about grounds for divorce is from Deuteronomy 24: 1-5. The first part states that when a man has taken a wife "and it come to pass that she has found no favor in his eyes, because he hath found some uncleanness in her: then let him write her a bill of divorcement..." The chapter goes on to explain that a woman who is divorced by her husband may then take on a new husband, but if the second husband divorces her or dies, she cannot marry again and she cannot ever return to the first husband.

In 1 Corinthians chapter 7, you can find more details about divorce and remarriage. The essential message found in 1 Corinthians 7:10 is "And unto the married I command, [yet] not I, but the Lord, Let not the wife depart from [her] husband." The chapter further explains that if a woman chooses to leave her husband, she should remain unmarried. 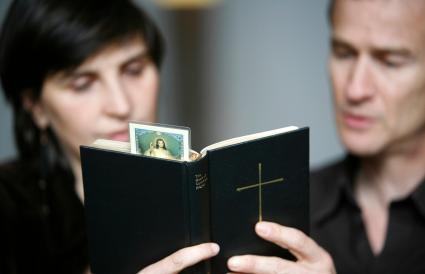 Bible Verses About Divorce From the New Testament

There are several verses about divorce in the book of Matthew. In Matthew 19:8, when it is questioned as to why Moses granted divorces, the answer is "Moses because of the hardness of your hearts suffered you to put away your wives: but from the beginning it was not so." This can be interpreted to mean that God did not intend for divorce to be an option, but Moses granted divorce because of the actions of those men.

Matthew 19:9 then says, "whosoever shall put away his wife, saving for the cause of fornication, causeth her to commit adultery." The verse further explains that anyone who marries this divorced woman also commits adultery, which is a sin according to the Ten Commandments. So, a man may divorce his wife only if she has sexual intercourse with someone else.

When a woman is choosing to divorce her husband, Mark 10:12 says "And if a woman shall put away her husband, and be married to another, she committeth adultery." This suggests a woman does not have any grounds to request a divorce and get remarried, and if she does, she is sinning.

The exception for women and remarriage comes in the New Testament in Romans 7:2. This verse states, "For the woman which hath an husband is bound by the law to [her] husband so long as he liveth; but if the husband be dead, she is loosed from the law of [her] husband."

Later, in Hebrews 13:4, it is said that "Marriage [is] honourable in all, and the bed undefiled: but whoremongers and adulterers God will judge." This further solidifies the Bible's previous messages that adultery is the only grounds for divorce.

Is Divorce a Mortal Sin?

The short answer to the question "Is divorce a mortal sin?" is no. A mortal sin is often viewed as an intentional violation of one of the Ten Commandments. Not committing adultery is one of the Ten Commandments, but divorce is not specifically mentioned. However, others would say all sins resulting from intentional actions are considered moral sins because they disrespect the relationship with God. Those who believe in Jesus Christ could argue that Jesus died on the cross for all of man's sins, thus if getting divorced is a sin at all, it has already been forgiven by this act.

Understanding the language and context of Bible verses about divorce can be complex. Consider talking with your pastor, minister, or other trusted church official for further explanations about the Bible's advice on divorce and how to deal with life after a divorce, including what the Bible says about parenting.